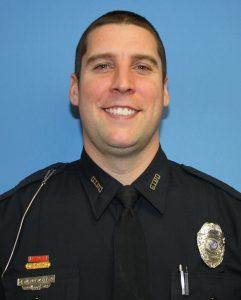 Eric grew up in Alpena, Michigan and graduated from Alpena High School in 2002. Eric was very active in many sports throughout his High School years. Eric played football and currently still holds the High school record for the most reception yards in a single season. Eric also enjoyed basketball and baseball as well and excelled in both at the highest levels.

Eric was hired as a Patrol Officer in Gerrish Township on June 13, 2006. Eric is assigned to GAP 1.

Eric has a great friendly personality and has already made himself at home here in Gerrish Township.

Officer Muszynski received a Department Certificate of Merit Award in 2008 and has co-chaired the Annual Trunk or Treat and Haunted Trail for the past six years.