The Teen Emergency Response Team (TERT) has moved forward in its planning by setting up the following training schedule.  There will be a variety of Instructors who will share their knowledge using both classroom and practical instruction.  The following trainings will be held at the Gerrish Township Police Department unless otherwise directed. 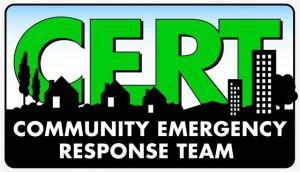 Through Teen CERT you can serve your community and help take care of your school and home. If you are interested in becoming a Teen CERT member, please contact:

Trunk or Treat Planning Under Way

The planning for the 6th annual Trunk or Treat is well underway. Visit the Trunk or Treat event page for more information and download the registration forms.

Join us on October 20th at the Gerrish Township Hall for the October community meeting at 7:00 pm where Jim Keysor of NOAA weather in Gaylord will be presenting a Winter Weather spotter class. 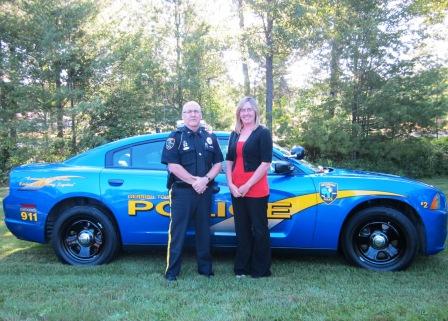 As of July 2nd, the newest vehicle of the Gerrish Township Police Department’s patrol fleet was put into service. The 2014 Dodge Charger will take the place of the oldest patrol unit, a 2010 Dodge Charger, under the department’s regular vehicle replacement policy.

Over half of the cost of the new vehicle itself was covered by a grant written by Chief Hill through the USDA’s Community Facilities Grant Program. Chief Hill worked with U.S. Dept. of Agriculture Area Specialist, Kristy Aikens (pictured in photo with Chief Hill and the new patrol vehicle) and received $12,000 toward the new patrol car. The Rural Emergency First Responders Initiative through the USDA provides funds to specifically strengthen the ability of rural communities to respond to local emergencies and is based on population and Median Household Income (MHI).

Besides the normal removal and replacement of equipment from the old car to the new one, the 2014 Charger has been equipped with a new audio/video system as the old system was eight years old and parts and technology were becoming obsolete. A new high-band radio was also installed for seamless communications between Officers and Fire/EMS agencies.

Chief Hill and ACT NOW Chair Mary Link presented the 2013-2014 Citizen of the Year Award to Sharon Zacny. Sharon has served on the ACT NOW board for many years both as a voting member and advisory non-voting member. She is also the Gerrish Township CERT Team Coordinator and puts countless hours in serving in that capacity. Sharon is always volunteering her time whenever she can (which is a lot) serving our community. Congrats Sharon on your well deserved award! 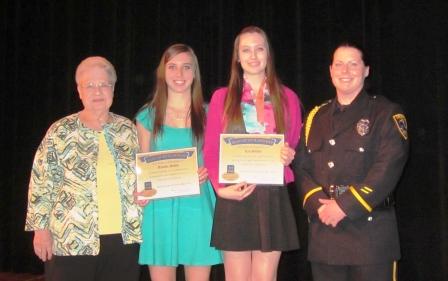 On May 6, 2014, ACT-NOW announced the recipients of the ACT-NOW/Gerrish Township Police Department Annual Scholarship Awards to graduating seniors at Roscommon High School. The awards were in the amount of $500.00 per award and the funds are directed to the Community College or University of their choice.

Awards were based upon the applicants family income, good citizenship, minimum of 3.0 GPA with a highlight on the importance of Outstanding Community Service and Leadership as articulated in an essay. Congratulations and best of luck to Janelle Gavin and Lea Stites!

2013 Gerrish Township Police/ACT-NOW ATV raffle has concluded with the winning ticket being drawn at Fred’s Restaurant on Nov 18, 2013 at 7:30 p.m. The winner, Ken Poirier of Roscommon, Mi is pictured below picking up his ATV at Pioneer Hills Marine. In photo (from left to right) is ACT-NOW Treasurer Bob Barber, Sgt. Greg Patchin, Winner Ken Poirier on ATV, Pioneer Hills Marine Owner/Operator Bill Morley and ACT-NOW Chairperson Mary Link.
A big thank you to all who worked on this fundraising project!

Officers with the Gerrish Township Police Department are continuing to investigate a marijuana grow operation after investigating a dog at large complaint.

During officer’s patrol on Saturday October 12th, 2013 around 0130 hours a loose dog ran in front of the patrol unit almost causing an accident. Officers followed the dog to a residence and noted the dog had entered the home through an entry door that was standing open. After a short period of time, officers were able to make contact with the female home owner. During officer’s investigation and contact with the home owner they observed some suspected marijuana and drug paraphernalia inside the residence. The female home owner gave officers consent to search the residence where a large marijuana grow operation was located in a back bedroom of the residence. Officers seized a large amount of marijuana to include 13 large plants, 6.7 ounces of processed marijuana, 1 large container of hashish oil, large amounts of drug paraphernalia, and several large lights and materials used to grow the plants.

Officers arrested the female home owner and her husband for Felony Manufacturing/distributing a controlled substance and maintaining a drug house. The names of the subjects are being withheld pending their arraignment in the 82nd district court of Roscommon.